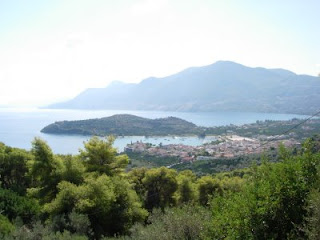 The Peloponnese and Our Historical Tour

Sept. 25-It's pouring rain in Athens at the moment but has been nice overall. We have visited Olympia, Delphi, and other areas of western Greece. Olympia was of course the site of the original Olympics. We saw the first stadium, which could seat 40,000 people. A couple guys from another tour group decided to race to the end and back, just like they would have back then. When they returned, the group had olive branch wreaths for their heads, just as the winners would have received in ancient times. 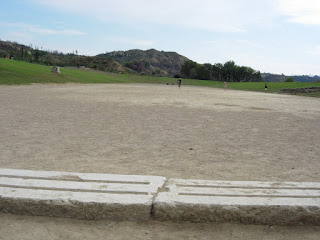 Speaking of olive branches, we saw about 4 million olive trees- seriously! We also saw some really pretty mountain ranges.Delphi was an ancient site visited by pilgrims for in 5th or 6th century BC. It's way up on a mountain. I got a little motion sickness on the way up on some really curvy roads. My head stopped spinning after I rested at the hotel. 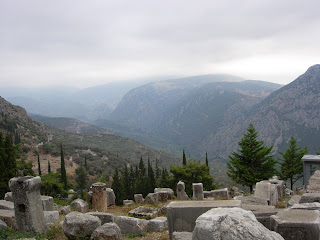 We visited Mycenae, which has archaelogical ruins from the 16th Century BC. We had seen artifacts taken from this site at the museum in Athens- gold and bronze jewelry, vases, bottles, weapons, etc. 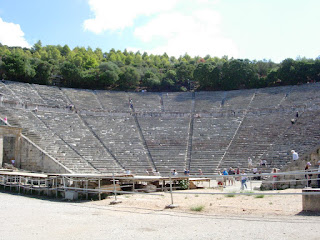 Epidauras, a Large Theatre in Greece

We also visited Epidaurus, which has one of the most intact amphitheatres in Greece and could seat about 7,000 people. It had great acoustics, and it was huge. That was cool to see, since I've been involved with theatre for so long. Tomorrow we fly to Santorini, which should be fun.
Posted by Alison at 8:00 PM