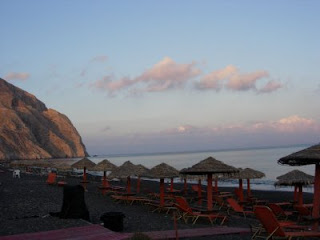 Perissa Beach, Santorini
SANTORINI or Thira
Sept. 28- I'm enjoying my time staying in a lovely Greek hotel in a small beach town called Perissa, in Santorini (or Thira). It has a large rocky mountain and a long beach of black volcanic sand. The water (Aegean Sea in the Mediterranean) is very blue and warm. The weather has been mostly good. Yesterday we sat in the lounge chairs for a little while on the beach, under straw umbrellas. I swam some as well. It got really windy and rather cold though, so we're hoping today is better. 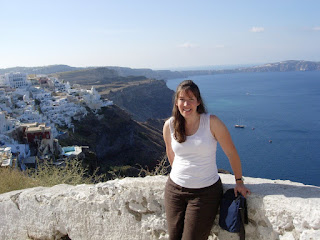 We're taking a sailboat cruise to a volcano to go hiking, to natural hot springs, to another small island nearby, and to the town of Oia. Oia is supposed to have the best sunset in the island. You can stand in the cliffs that overlook the Caldera and see the sun set in the midst of all the white buildings built in to the cliffs. The Caldera was formed in 1600 BC by a volcano that destroyed 3/4 of the original island, so now the caldera is sort of like a large bay. We went to Fira yesterday and climbed steep hills, walked through narrow stone pedestrian streets between the buildings, at at a restaurant overlooking the caldera. It was really nice there, and we had a beautiful view. 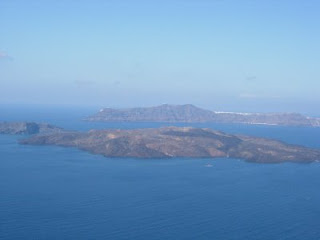 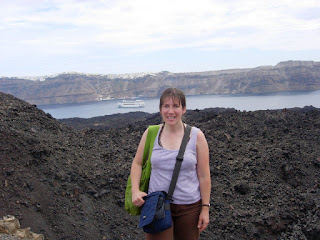 Sept. 30- We went on the boat tour around the Caldera in Santorini on Sunday. I climbed to the very top of the volcano and could put my hand over an area where the sulphur still smokes up through a hole. The volcano has erupted about 4 times I think. The earliest one caused one side of the island to implode in 1600 BC or so, hence the large open bay between the volcano and the island now. The bay is the Caldera.
So, after the volcano, we took the boat to one side of the volcanic island, and the guide said whoever wanted to could jump out of the boat, off the ladder, (the ship looked like a pirate ship!) and swim over to one corner of the island to the hot springs. So, I went down the ladder on the side of the large boat, swam 15-20 yards, and swam through the hot springs. They weren't really hot, really just warm. Sulpheric rock floated about us. It was a fun experience, but a long swim each way when I haven't swam in a while!
Soon after we all got back on the boat, it started raining really hard. I didn't get very dried off! The sails were over the seating area, pulled straight across to block much of the wind and rain. I was glad to have my rainjacket, as it got quite cold, windy, and rainy. We still had a few more stops.

We went to another small island nearby, Thirassia, that was also once part of Santorini or Thira. We had lunch there and I was able to warm up and get dry. 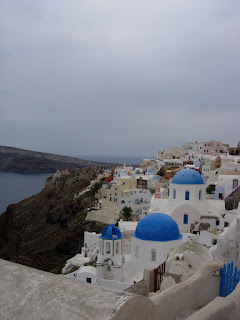 Oia, Santorini
Our next stop was Oia (I-uh), on the northern tip of Thira. Oia is in many postcards and paintings, it's very pretty with blue-domed churches and white buildings and homes, tucked into the side of a very steep cliff. When we arrived at the port, I looked waaaaay up to the top of the cliff, where the town is. Our guide says, "Ok, 2 ways up- walk up 285 slippery, wet steps, or pay this guy 5 euro and get a donkey ride up to the top." 285 steps? I went with the donkey ride. I was already tired from climbing a volcano and swimming many yards, and I have asthma with exercise, so I thought I should take it easy. So the donkey gave me a ride, nearly to the top. Poor donkey, it's quite steep- I wonder how many times a day he does that?
Oia is known for its beautiful sunsets, and we had arrived on time for that. But wait- it had been pouring rain for hours?! The rain stopped just before we reached the town. However, all we saw of the sunset was a few light pink clouds. I still got some good photos of the town though. Lots of good little shops too. It was fun to visit. At the end of the long day, we took the bus back to Perissa, quite tired.

On the next day, Monday, we had a large travel day, taking buses and ferries to get to Mykonos, another island a few hours away. Usually, travelling days are fun. However, I woke up feeling quite ill with stomach problems on Monday. It didn't start out too bad, but as we traveled on the buses and ferries that day, I felt worse and worse. I'll spare all the details- I think it was food poisoning/stomach flu/weird traveler disease. I haven't been that sick in years- after breakfast I couldn't eat all day, and I slept for 3 hours after we arrived at our hotel at last in Mykonos. I think something I ate the day before didn't agree with me. Ah well. I felt much better by the evening.

Mykonos is very pretty. Lots of nice beaches. I've explored much of the island today and rented an ATV, driving all over the island, going to several of the small towns and beaches.
We'll go to Paris in a few days. I've really enjoyed Greece, so I'll miss it. I found the people we met, especially, to be very friendly, hospitable, and relaxed.
Posted by Alison at 9:30 PM