London. I arrived in London early on a Saturday morning, hopped on the metro (usually called the tube) and found my way to my hotel near Russell Square. I studied in the United Kingdom years ago in college with a group of students from my college, and we traveled all over the United Kingdom and France studying British literature, drama and travel writing. This trip was a bit of a reminiscent experience, going with other alumni to many places we had visited back in college.

After dropping my bags at the hotel, I walked through Russell Square, which hadn’t changed much over the years. I remembered arriving in London with my classmates years ago, and trying to find our way around this area of London. I made a plan for the day, thinking of the things I didn’t want to miss seeing in London, and grabbed the tube to head into central London. 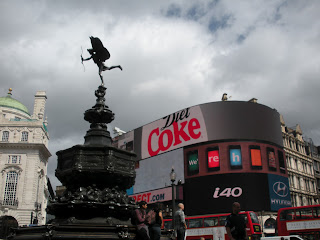 After buying theatre tickets for the evening (Wizard of Oz), I wandered through Leicester Square, stopped in the active Piccadilly Circus area to people watch for a bit, and walked over to the National Gallery. In Trafalgar Square, lots of people walked about taking photos, but I also noticed a lot of policemen (often called bobbies). I asked a fellow tourist if something was going on, and she said it was something to do with a parade for the queen’s birthday nearby. A bobby directed me to where the parade would go through. Within a few hours of arriving in London, I joined the spectators lined up with their British flags along the Mall and saw the queen’s carriage and a carriage with Princess Kate, Camilla and Prince Harry. So cool! 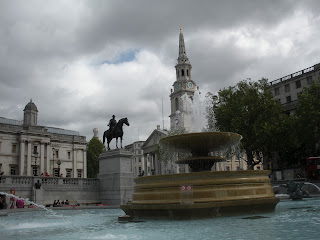 Later, I walked through the National Gallery, seeing amazing paintings by Monet, Renoir, Pisarro and more. Then I headed back to the hotel for a bit as I was beginning to realize I had been up for well over 24 hours… But I soon had more energy and I went down to the Thames River, walking along the South Bank and seeing the London Eye, Houses of Parliament, Big Ben and more.

Later, I went up to Oxford Circus, to the theatre where I’d be watching the Wizard of Oz. Some of it was good, and the songs were decent, but the humor was cheesy and not my style. But I was still happy to be sitting in one of the old classic London theatres watching a play for half-price! A couple down the row from me had a plastic bag full of snacks and soda from the convenience store. And vendors came down the aisles with Ben and Jerry’s ice cream. Things I'd never seen in an American theatre.

I ended the day meeting several members of the group I’d be touring with for a couple weeks, and we all shared stories of royal sightings and other fun stories from the day.

The next day I had just enough time to go to the British Museum and see all the great artifacts there, like the Rosetta Stone and the Parthenon Frieze. It was crowded with people and tour groups. But I stopped when I saw a man lifting up a young girl to let her touch the face of one of the Egyptian sarcophaguses. At first I couldn’t figure out why he would lift her up to touch the face. Then I saw the little white cane resting against his leg. She was blind, and he was helping the little girl experience the museum, beyond what his words could explain. 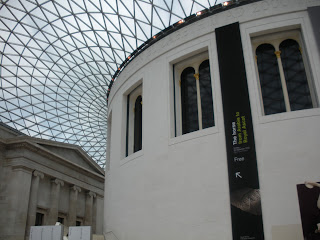 Next, I went down to see the Houses of Parliament and Big Ben once more, to see Westminster Abbey and to walk down Whitehall, past many government buildings and the Horse Guards and down to Trafalgar Square. Trafalgar Square was packed with people and tents, and as the smell of curry reached me, they were apparently having an Indian food festival. I hopped on the tube, met the group back at the hotel, and we drove to our next town on the itinerary, Oxford. It was a quick visit to London but a good one!
Posted by Alison at 7:49 PM No comments: