A Green River, A Leprechaun and Green Drinks: St. Patrick’s Day in Chicago

I’d heard Chicago was an Irish town, and that Chicago threw a great Saint Patrick’s Day party. Chicago has a parade and many other festivities every year for Saint Patrick’s Day. But I hadn’t had a chance to experience it until this year.

My friends and I spent the weekend in downtown Chicago over St. Patrick’s Day. On Saturday morning, we had plans to see the river dyed green.  Every year, near Michigan Avenue, the Chicago River is dyed green for St. Patrick’s Day. Thousands of people come out and line the river, blocks in each direction, to glimpse the dyeing of the river. 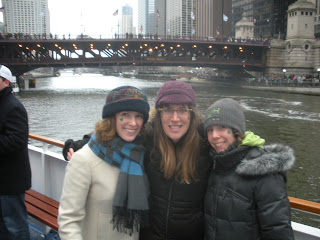 We had bought tickets for a boat tour, and planned to see the river dyed green from the boat, so we needed to get there early.

But we left our place late on Saturday morning, so we speed-walked and jogged a few blocks down the street, through a plaza, across Michigan Avenue, between the Wrigley building and down the stairs to the river to try to make it to our boat by loading time. We made it, just a bit winded, a minute late. No one seemed to mind we were late.

The boat stayed at its dock near the Michigan Avenue Bridge until after the river had been dyed green. The crowds lined the banks of the river and the bridges, huddling in the cold with coffees and other hot drinks, wearing green hats, shirts and beads. I thought I could hear sounds of bagpipes in the distance at times.

While we were waiting, a car came along—on the water! — and the driver drove along, as if it was perfectly normal to be driving a car on the water. I’m guessing there was some sort of boat device underneath the boat, but it looked pretty cool! 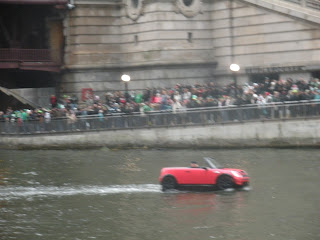 Then we saw the speedboat coming towards us, with the two men in the back of the boat shaking cans of dye, which looked like orange food coloring, into the water. The boat circled about in the water. Behind it a smaller boat helped blend the dye in the water. 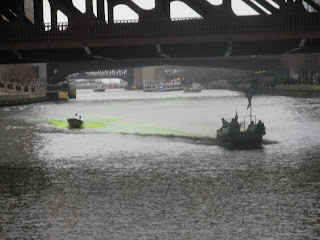 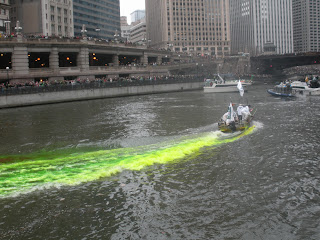 The speedboat came by a few more times, with the men shaking orange dye in the water, and the smaller boat following behind in the water to help the dye blend and turn green in the water. 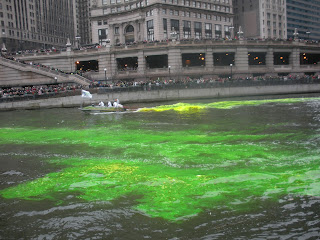 After the boats continued back down the river, another boat came along, with a long hose behind it. On the end of the hose was a small platform, which kind of looked like a skateboard, with a leprechaun standing on it. The hose popped in and out of the water, swirling from side to side in the water, with water surging into the river from the bottom of the small platform under the leprechaun's feet, which seemed to help to turn the water even more green. 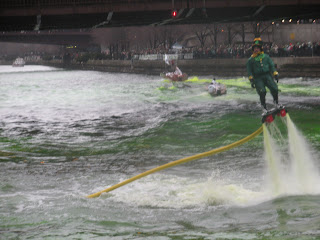 After the boats had mixed in the water and the leprechaun had come along, the river was really green for St. Patrick's Day! 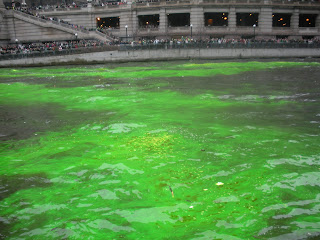 Later, we took the boat tour, seeing many of the historical sights in Chicago. 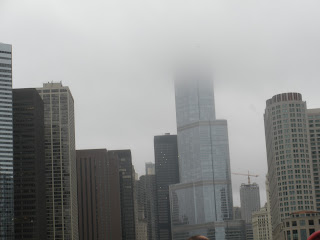 We stopped to warm up and have some Chicago-style stuffed pizza—yum! And we had some drinks, including green drinks and some Irish-style coffee and hot cocoa.

And then we watched part of the Chicago Saint Patrick’s Day Parade. Many people lined the street, as marching bands and floats made their way down the street. I’ve heard the parade is about 3 hours long, but we only see part of it. It was still fun to see everyone in the parade in festive green outfits, smiling, handing out candy and green beads, and cheering “Happy St. Patrick’s Day!” throughout the parade. 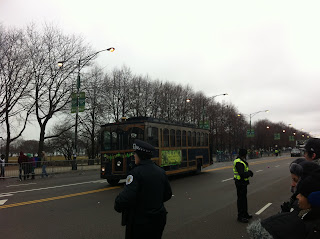